At least, that’s what one of my projects (a laser engraver) looks like right now. But not ALL of my projects look like such a spaghetti mess. Sometimes – as in this power supply – I manage to make things a bit neater: 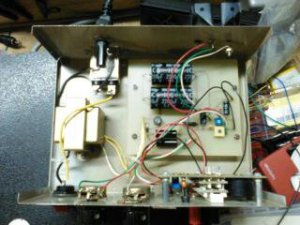 Electronics CAN be messy, and in a way it can be fun to make a circuit by connecting parts with a tangle of wires; it’s order out of disorder to me. Back in my college days when I was pursuing a BSEE, I had one particular instructor in my Digital Circuits lab sessions who was very emphatic about placing components in a certain order and routing connections neatly. We had a great rapport, and he knew that I understood the material well, so he was somewhat lenient with me. But he was a stickler for neatness, and would occasionally take marks off for my messiness! (He also took marks off for one of our labs in which I used a somewhat clever trick to simplify the circuit, but that’s a story for another post!)

So how important is neatness? The answer to this is the same answer that I give for most questions involving engineering: it depends! For new electronics enthusiasts, neatness really helps in verifying connections, and the use of certain colors (like red for power and black for ground) also helps in identifying common circuit nodes. A neat layout is also easy to modify; my rat’s nest laser engraver control circuit is a real pain to modify since it’s really difficult to move wires and components buried by layers of connecting wires. But if you don’t mind chaos, and if you’re in a hurry, you can probably tolerate messy connections – especially if the circuit is just going to be temporary or if you will be making the final product much neater. Someday I’ll do this for my laser engraver (let’s just hope that someday actually comes!).

Because Electronics a great hobby that lets you learn at your own pace, and is at the heart of most of the technological devices in use today. That's why!